Hey Folks,
My obsession with all things Star Wars continues, this time with a repaint of my Rebel Fleet I collected ages ago. Jamie and I ported over the ships from GW's Battle Fleet Gothic as it's a nice fleet scale game and suits the Star Wars "broadsides in space" type capital ship battles.
I wasn't happy with the paint jobs previously, especially on the Mon Calamari Star Cruisers. These are from Odyssey Slipways and while nice models they didn't have panel lines engraved, so I added these with Mica pen and highlighting. 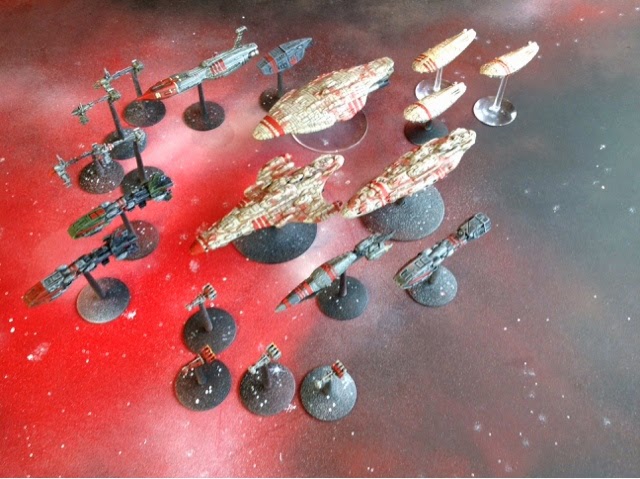 Ready to throw off Imperial Oppressors the 7th Rimward Fleet is painted with the red markings of the Old Republic in remembrance of the former Republic and as a sign of its mission to restore it. 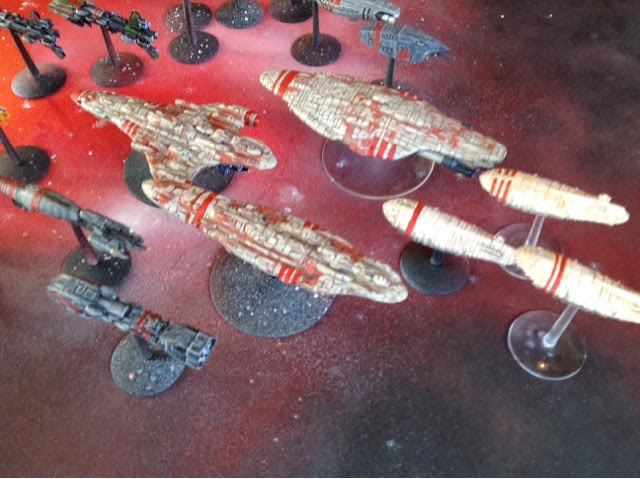 Three Mon Calamari Star Cruisers are the core of the fleet. The MC-80 and MC-80 (Winged) Star Cruisers (bottom and middle) are the Odyssey Slipways ships. These count as a Grand Cruiser and a Battleship respectively. The top Star Cruiser is a converted Viscount Star Defender from Wizards of the Coast Starship Battles. I'm counting it as an MC-90 Star Cruiser which is also a battleship. The three transports are WotC Gallofree Yards Transports which are way out if scale (about 5 times too big!) so I'm counting them as Bulk Cruisers for escort missions. Two of the fleets Cruisers and the Corellian CR-90 Corvette Squadron. The bottom cruiser is an Old Republic Dreadnought which is very slow but fairly tough while the too cruiser is a converted WotC Recusant Class Separatist Light Destroyer (which were used by a Rebel forces after refits in the early days of the Rebellion) 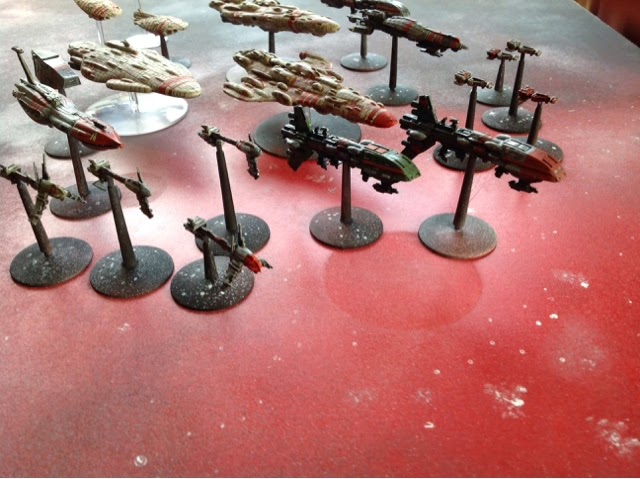 Two Assault Frigates - fast and hard hitting Drednought conversions - are supported by my Nebulon-B/B2 Squadron. I did have frigates but one broke :( 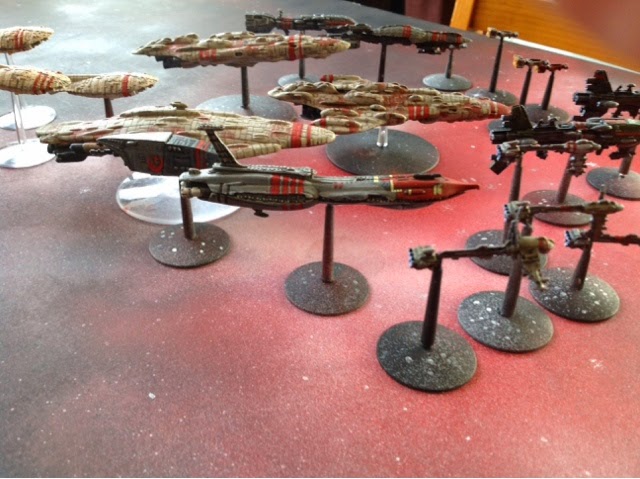 Carrier Support - a captured Imperial Escort Carrier (the flying box) and a refitted Munificence Class Battle Cruiser (General Grevious's flag ship from Revenge of the Sith)
Photos are a bit average and a few stands to paint but otherwise job done. Next up I will pick the (mostly chaos) BFG ships that best match and build a roster. Hope to get a game in tomorrow!
Cheers
Jason
Posted by Unknown at 2:38 PM 5 comments:

Hey Folks,
Long time no post. Recently I've become quite addicted (there is a trend here...) with Fantasy Flight Games X-Wing game. Like most people who play (and there is are a lot in Christchurch) the easy game rules, pretty pre painted models and the chance to make "pew pew" noises is quite appealing.
I've a modest collection of Wave 1-4 ships for the Imperials and the Rebels but none of the big toys yet.
I popped round to a work colleagues place for a game today and Steve is one of those guys with everything, including this; 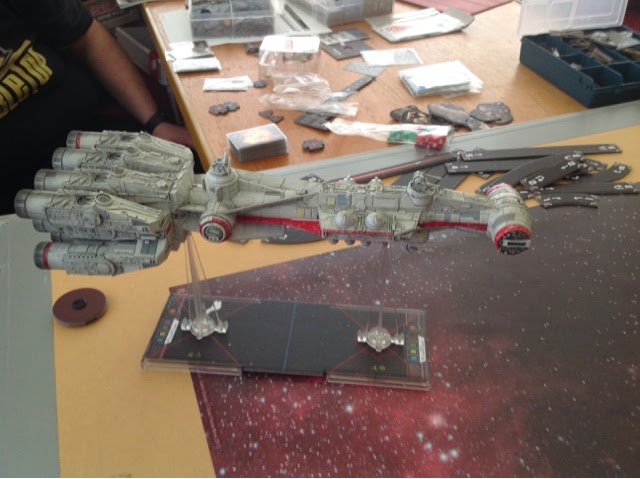 The Tantive IV, a corvette with a whole lot of guns...  Imperials lack huge ships so far so I was going to have to bring some minnows to bring down this whale 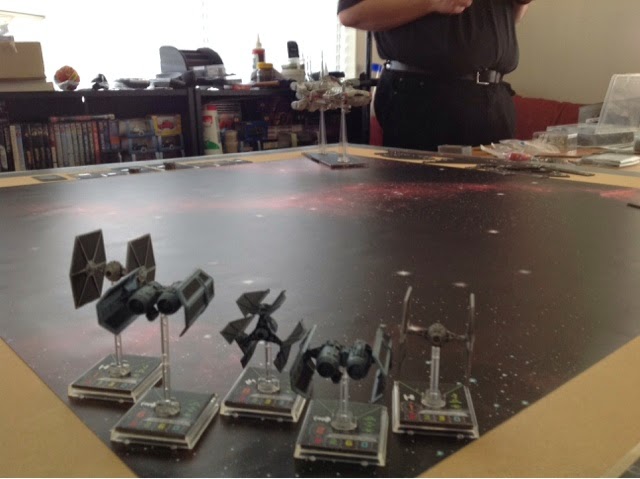 Target Acquired. Steve lent me some of his Imperial swarms so I had my Defender (Brath) with a couple his academy TIEs and two TIE bombers, one of whom was Jonus. The Bombers were packing concussion missiles and proton torpedoes while the Brath had concussion missiles as well. The imperial plan revolved around focus firing swarms of ordinance and hoping something sticks... 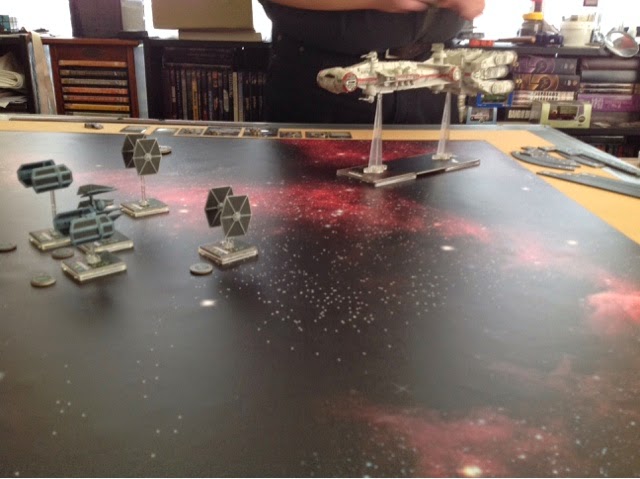 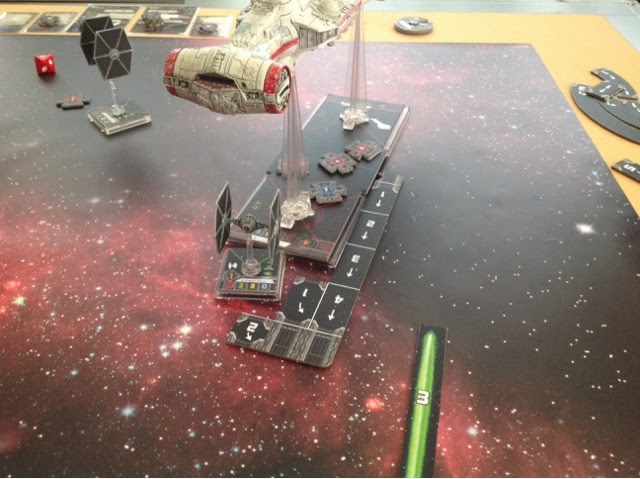 But I don't dodge this! A TIE pilot gets too close and crashes into the fore structure, being destroyed instantly! 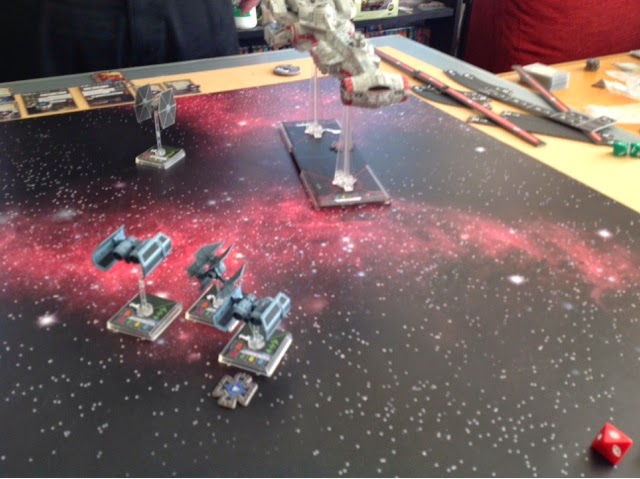 Missiles Away! Three concussion missiles rip into the front of the beast and shred the fore shields before heavily damaging the front section. A May have said at this point "We have you now" :) 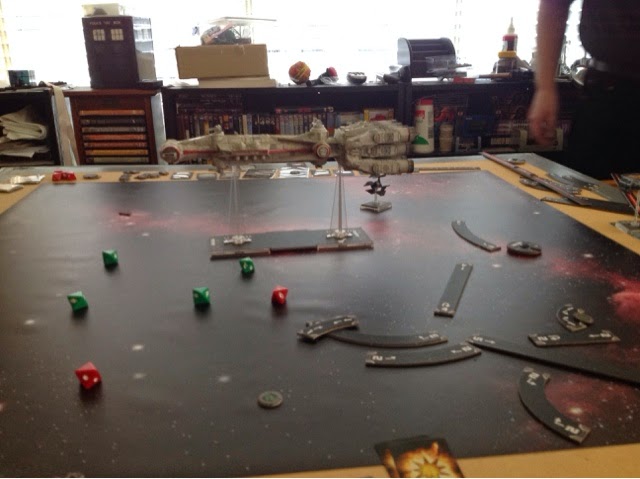 So what happened?!
Firstly my iPad died so I couldn't take photos ;)
I banked left and overshot dropping target locks on the beast as it banked to chase. I then k-turned with the bombers and volleyed off the proton torpedoes that resulted I. The front section being crippled. Meanwhile my other tie had been harrying its flank and got shot down in a hail of quad laser cannon fire while Jonus got smashed by a Turbolaser battery at range. Brath in his Defender had managed to get around behind the beast and start to shred the engines. Alas Brath got too close and the Tantive swung around and swatted him with its rear end (lol)
I'm sure we got some stuff wrong but it was super fun!
We also played a game prior where Steve ran an upgraded Chewie Falcon and Ibitsim in her B-Wing. I had two Royal Guard Interceptors, a PS1 Defender and a Sigma Squadron Phantom 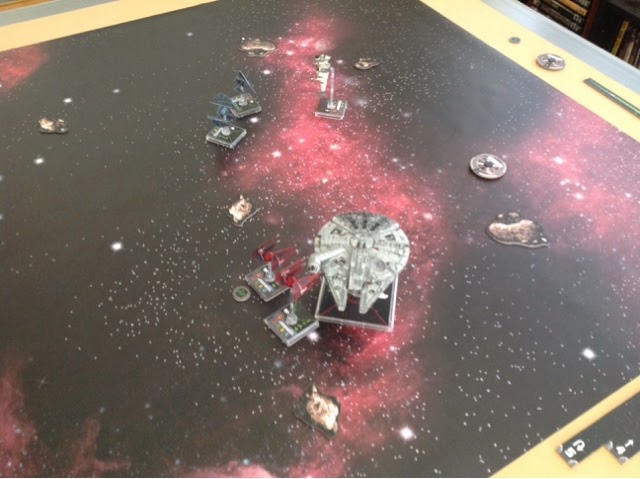 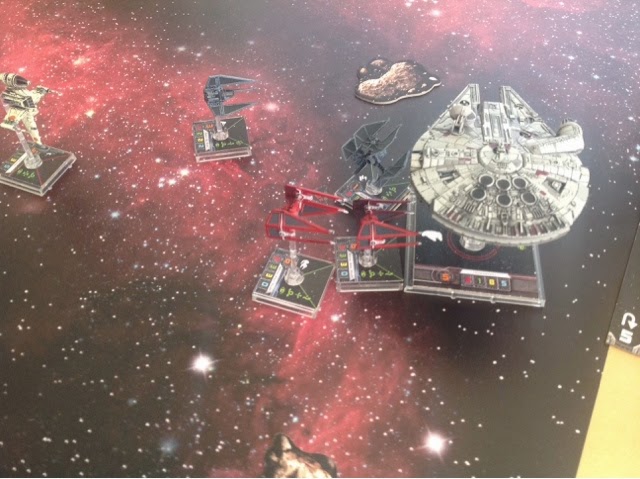 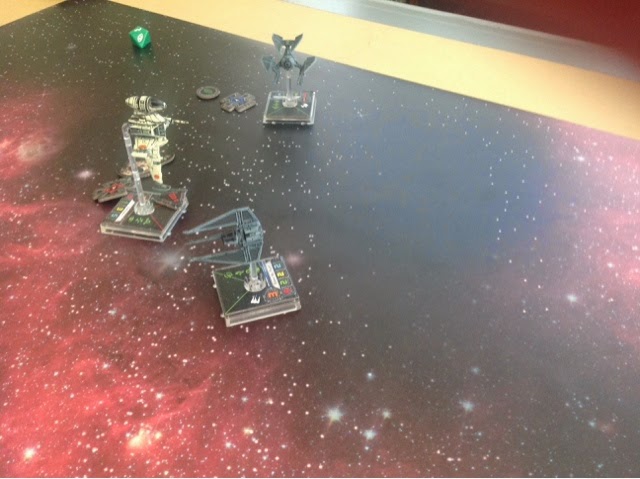 A good game. I crashed into the falcon way too much but in the end took it out by ignoring Ibitsim (and getting luck on the evades) and focusing on Chewie before the turret could kill my fragile interceptors. Sigma Squadron Phantoms are nowhere near as cool as Echo with the Advanced Cloaking Device (which I didnt have) but combined with my defender managed to eventually outmanoeuvre the B-Wing and bring her down.
Next up for X-Wing: Pirates!
Cheers
Jason
Posted by Unknown at 12:22 AM 2 comments: