Just finished up today at Conquest today and things went pretty well, all my joking about "submarining" after Bob's Para's slaughtered me...but I ended up picking up; 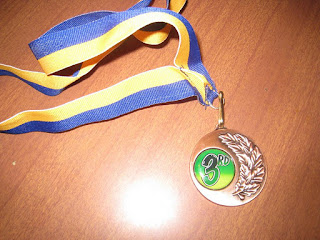 After much "list frothing" I ran 6th Fallschirmjager from Market Garden as seen here with the addition of two of  Pooch's Jagdpanthers. I did change the list a little bit to have two 7 stand FJ platoons and a 7 stand FJ Pioneer platoon (with 2 Flamethrowers) and a full HMG platoon.  It was quite a good choice in the end.

I didn't take my camara alas, so in brief;

Estella picked up a well deserved Best Sports with Pooch and Craig 1st equal, but Craig landing 1stPlace (for like the 10th time :)) as he defeated Pooch in their game.

Thanks heaps to Stephen S for running it and Comic's Compulsion for Hosting the event.

Cheers
Jason
Posted by Unknown at 1:11 AM 9 comments:

Did this awhile ago, but here is the first 2' by 2' section of my naval terrain I am making for my impending Prussian Empire fleet;

The boards are 3mm MDF (which is a bit thin)  with the water areas covered in tin foil, sprayed a couple of shades of blue, drybrushed a lighter blue and then given a couple of layers of gloss varnish.

The islands are thick as polystyrene covered in bostik gap filler and then a mix of sand with the rocks being pumice.  Painted with test paints.

The kids helped me cover two open flat boards with foil and I have added foil to another board with islands.

I will be looking to add a landmass to one with a largish city as well.

Cheers
Jason
Posted by Unknown at 1:27 AM 13 comments:

Here is a the first 4 turns of the Total War game organised by Simon.  It was super awesome and the other Christchurch Bloggers have been blogging up a storm about it.

Super kudos to Simon for organising it, Andy T for ironing out the game play wrinkles and Stephen S for all his awesome terrain...and I will think you will all agree it looked suitably EPIC :)

What I didnt take photos off was my PaK 40 Ambush that I popped on the far flank next to the 2 Priest Batteries that had just double moved...it killed a 3 Priest and drew off a Sherman Platoon and a Motor Rifle Platoon.  Likewise when I pulled out a Panzerfaust Trap team down by the Priest's later on a Motor Rifle Platoon came back to deal with him...

This diversion of forces, defensive tactics (and the Jagdpanther "psy weapon") delayed the Allied Armour and helped ensure they didn't quite get to the Bridge in time to save Frost.

End result was a Narrow Victory to the Germans...how historical!

Cheers
Jason
Posted by Unknown at 1:31 AM 5 comments: